A  Serene Place Of Worship on  a Hill Top in Krishnanagar

Sri Vaishnava Sampradayam occupies a special place in Hindu Religion and traditionally all the followers of this  cult worship Goddess Lakshmi Devi and  Lord Vishnu together which is how the origin of the name Sri Vaishnavism  came into usage from the vedic period.  The core essence of  Sri Vaishnavism lies in the belief that moksha can be attained only  through devotion and service to the lord and detaching oneself from the material world  and  it can happen only by the grace of god.

They say  nothing can happen without divine blessings of the lord and he never fails to bless someone whose intentions are altruistic and meant for the good of society in large. 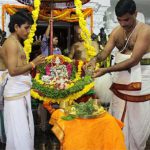 Hailing from a orthodox service oriented  Brahmin family  Dr. Dhanunjaya . G.V  a qualified practitioner in General Medicine after completion of his post graduation in medicine started a hospital near Krishna Nagar and extended services to patients who regard him as possessing a healing touch. A ardent devotee of Lord Ranganadha, Dhanunjaya and his family were actively involved in mobilizing Sri Vaishnava community members and regularly held devotional concerts and performed puja’s on all auspicious days of telugu calendar. Gradually  under his leadership this community decided to construct a temple exclusively to the lord and initiate the sri Vaishnava traditions in true sense. As  the community had a clarity in their vision with benediction from the lord things started moving at a amazing pace with the clearance for the  site for  constructing the temple in the HMWW area in the colony.  The then legislator Raji Reddy and other key officials coordinated and  their dream became a reality and on May 22nd 2015 amidst the presence of  Sri Chinna Jeeyar Swamy  the temple was opened for public after all rituals adhering to the practices followed by Sri Vaishnava Sampradayam in Sri Rangam Tamil Nadu.  The unique feature of the temple is that it is located on a hill top hence gradually the place was popularly called Sri Rangagiri Gutta and Dr. Dhanunjaya became the full time chairman of the temple trust. The highlighting feature in the temple is the idol of the lord in a sleeping form which was carved very diligently by famous sculptors along with Sri Lakshmi Ammavaru  Sri Godadevi  are worshipped very religiously in this temple. A blissful and serene atmosphere captivates the devotees upon entering the temple one can experience a divine touch in the temple premises. A Gaushala is also there, Daily rituals to the lord are taken care by a young learned archak  Sri. Kondapaka Vijaykumar Acharyulu.

Important Days in the temple

Apart from daily rituals to the lord  Karthikamasam, Dhanurmasam, are celebrated in a special way during this period famous Adhyathmika guru’s and Saints who have immense knowledge about divine practices visit and engage in discourses for the interest of people. All practices of the Ancient Ranganadha swamy temple like Utsavams during which the lord is decorated and appeased with Alavar traditional  and  vedic hyms  in Tamil Nadu can be seen in true sense in this temple which is noteworthy. A must visit temple for all devotees seeking mystical power which can alter your life with the blessings of the lord.