A One Of Its Kind Temple, Where Along With Kali Mata,Lord Ganesh And Lord Shiva are Worshipped At Vivekanandapuram, Defence Colony. 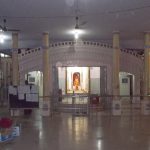 It was in the year 1971, when about six Bengali families who had settled in this colony decided to have a place of worship, a temple of Kali Mata was what they planned as those days, this area was nothing but a thick jungle with very few houses. These families had the firm belief that a temple of Ma Kali will protect them and their families. With Persistent efforts of these families in the year 1974 formal foundation stone was laid on a big rock at the base, with a photograph of Ma Kali initially by Swami Ranganatha Nandaji, Maharaj of Ramakrishna Mission (Math). Mr A.K .Ganguli, the first priest of this temple commenced the daily rituals in the temple.

Sri N.R.Nath, Sri B.C.Chakroborthy, Brig Sirkar, and Sri Barin Ghosh are the founder members who were instrumental in mobilising funds from voluntary donors and meeting key leaders for getting sanctions for land for constructing this temple. Today this temple is one of the prominent temples in the city which attracts large number of devotees especially during festivals like Dassera, vinayakachavithi and Mahasivaratri. Today, there are more than three thousand Bengali families living in the surrounding areas like RK Puram, Lal Bazar, Bolaram, Defence Colony, Sainikpuri etc who frequently visit this temple. Even devotees from other communities visit this place of worship.

The major attraction of this temple is the idol which is well decorated it was in the year 1976, an idol of Kali Ma made out of a single black stone, which is a replica on the lines of idols of Dakshineshwar Temple in Kolkatta. Many prominet bengali families who are ardent devotees of Kali Mata had a series of meetings and decided to name the temple as Sri Sri Kalibari Mandir. During the time of inauguration Swami Ranganatha Nandaji announced, That the colony in which this temple is located be named after Swami Vivekananda from then this place was named as Vivekanandapuram as swami Vivekananda was a great devotee of Ma Kali and who also is one of the greatest thinker of the Hindu philosophy.

Charity besides spreading the message of universal brotherhood and amity among people irrespective of caste, creed and religion is the fundamental ethics followed by all the trustees in this temple, who take up numerous activities from time to time. Regular blood donation camps and free food to poor on May 1st every year besides a school for the orphans, helping senior citizens and mentally challenged homes in the form of donations are some of the activities which can be counted as noble initiatives of this trust.. Many socio-cultural activities and cross cultural programmes are organised with elaborate arrangements wherein people get a opportunity to understand the art and glorious forms related to indian culture in its true sense, during festivals like Sankranti, Holi, Ugadi,Ganpati Utsav Durga Puja and Deepawali are a regular happenings here. A Must visit temple which is a glorious initiative with rich history behind it.