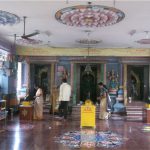 Saraswathi The godess responsible for knowledge, art and music is the most adored god besides supreme godesses lakshmi and parvathi who constitute the trio who along with Brahma, Vishnu, and maheswara, maintain blalance and control the universe.Among hindu customs and traditions one of the important milestone is when a child starts his education this is called Aksharabyasam this customary process is initiated by archaks who chant vedic hyms and appease the godess saraswathi to bless the children for their bright career.This is done especially on vasanta Panchami. Although there are prominent shrines like Basara and Waragal in Telangana State The Anantha Sarawathi Nagar Welfare association initiated this temple in 2004 and today majority of devotees visit this temple on all auspicious days and according to Sri M. Phanindra Sarma “this is a prominent temple for devotees who want to initiate the “vidyabhyasam” a sacred ritual done beofre putting their children in formal school”